A LEADING COMMITMENT TO R&D

MANN+HUMMEL prides itself on its research and development focus

Every year MANN+HUMMEL invests four percent of its sales revenue into research and development.
It states that it is proud to be able to say its developers are among the best in the world, and that by using their expertise, MANN+HUMMEL is able today to meet future threats such as air pollution and water contamination with very creative solutions.

A global research network
In the development of new technology, MANN+HUMMEL explains that it relies on a global network of researchers, universities and academic institutes.
In this way, it says it is able to combine the expertise of MANN+HUMMEL’s team and these industry leaders to meet the challenges of the future.
The flagship of MANN+HUMMEL’s research work is its Technology Center in Ludwigsburg.
“It is here that we are working around the clock to further improve our products and ensure they meet the requirements of our customers,” MANN+HUMMEL Chief Executive Officer, Werner Lieberherr, said.
“This is where we thoroughly test new products. In the development of these new technologies and products, closeness to industry and academic networks is important.
“Our R&D specialists, totaling more than 1,200 around the world, therefore work closely with universities and academic institutions.
“At the University of Applied Sciences in Raleigh, North Carolina (USA) for example, we have founded our own Innovation Center.
“There are also numerous joint ventures with universities in other countries and regions of the world.”

Nanofiber Filter Media for Engine Air Intake Filtration
Nanofiber filter media from MANN+HUMMEL has reportedly set new standards for commercial vehicle air filters.
MANN+HUMMEL says it offers an extremely high dust separation efficiency of up to 99.99 percent for the separation of particles together with low flow restriction and a long service life.
“Combustion air always contains particles which should not be allowed to penetrate the inside of the engine,” Werner said.
“The application of a highly efficient air filter is therefore essential in order to protect the engine and its components, such as the turbocharger or mass air flow sensor, against increased wear and defects caused by dirt particles.
“MANN+HUMMEL develops nanofiber coated filter media for the highly efficient separation, also amongst others, of fine particles.
“These filter media from MANN+HUMMEL are characterised by a verifiably higher separation efficiency along with the high dust holding capacity.
“A high-tech nanofiber coated filter media from MANN+HUMMEL is the first choice for vehicles which work in environments with a high level of soot or fine dust pollution. Typical application areas here are dusty construction sites, mines and car rallies.”

Good particle separation performance along with low flow restriction
MANN+HUMMEL explains that it has successfully used nanofiber technology for a few years in a series of applications for the commercial vehicles sector.
The nanofiber filter media consists of a carrier media and an extremely thin layer of ultra-fine polymer fibers.
The fibers with a diameter of less than one micrometer are approximately 200 times smaller than the fiber diameter of the carrier material.
This leads to a considerable improvement in particle separation and at the same time, nanofibers offer a further advantage: despite the high separation efficiency, the flow restriction remains very low.

“A comparison of the nanofiber filter media to the carrier material on its own demonstrates the performance which nanofiber technology offers filters,” Werner said.
“In the test of filter elements according to ISO 5011, nanofiber filter media retained up to 10 times more dust compared to the carrier material on its own.
“Standard media made from cellulose enable the separation of 99.9 percent of the total mass of dust particles in the air. The closely meshed nanofiber layers allow separation efficiency to rise to 99.99 percent.
“The high separation performance ensures that also smaller particles are separated by the nanofiber layer of the filter media.
“In order to determine the separation efficiency for a certain particle size, particles with a defined size are counted in the air flow upstream and downstream of the filter media.
“The results are shown using fractional separation efficiency curves. The nanofiber layer applied to the carrier verifiably reduces the passage of fine particles and therefore offers greater protection for the engine and its sensitive components.”

R&D tools
MANN+HUMMEL says it is clear it has the expert knowledge to develop high performance filter media which are configured to meet increasing customer requirements.
It explains that it uses simulations, laboratory tests and special analysis software to improve nanofiber coatings for customised applications and combines this technology with other media and materials.
In the development process, MANN+HUMMEL uses analysis software (with a patent pending) which is able to automatically determine the fiber diameter distribution and pore size distribution from scanning electron microscope images of nanofibers.
It explains that this distribution substantially determines the separation efficiency and flow resistance of the media. 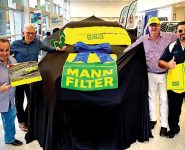