Respected reviewer says the tyre lives up to its reputation

Stuart Martin recently tested out Bridgestone Dueler A/T 697s on a LandCruiser 100-Series with a 17-inch fitment.
This model variant is one of the longer-serving tyres in the range and was brought into the market in mid-2012 after two years and nearly half-a-million km of torture testing in Australia’s toughest conditions.
“It has since then fallen very much into the ‘ain’t broke, don’t fix’ category, undergoing refinements but retaining the qualities that Bridgestone says makes it the ‘ultimate 4WD all terrain tyre’ with an aggressive tread block and decent shoulders for unsealed surfaces,” Stuart said.
“The all-terrain rubber sits within a family of Dueler tyres, ranging from mud-pluggers through to sealed-surface SUV performance tyres, and are available in a broad variety of sizes between 15 and 18 inches.
“Within the light truck construction casing are a pair of heavy-duty steel belts and additional nylon ply, covered by a dual-compound tread.
“There are larger-mass tread blocks, designed to improve the useful life of the tyre and improve its cut chip resistance, with even wear and little in the way of damage.
“The shoulder block was also redesigned over the former Dueler 694 tyre and has proven to be quiet on the road while still having ability on unsealed surfaces, not to mention giving the tyres an aggressive look within the wheel arches.
“The 697s even coped well in the first rain after a long dry spell, that leaves dust and other residues to mix with the water for a “slick-ening” effect on the road.
“More than a third of that distance covered since fitment has involved pulling the three-horse angle-load Titan horse transport – with the 697s shouldering the load impressively, validated by regular pressure checks that confirm the Bridgestones have held their nerve.
“There’s enough shoulder either side of the somewhat-aggressive tread pattern to supply grip and confidence on unsealed surfaces, without howling at the moon when put back on the bitumen.
“The tyres feel assured on the motorway and composed on the unsealed section, and with a comfortable and quiet road on broken metropolitan bitumen. Driving without the trailer reaffirms my liking for the tyres.
“Replacing the OE tyres with the same make and model could well save as much as $50 a tyre but the speed and load ratings might not match the Dueler 697, which in this instance are 275/65 R17 with a 118 load rating and an S speed rating – which equates to 1320 kg maximum load per tyre and 180 km/h respectively.
“Despite numerous offerings for the size with load and speed ratings that are close to the Dueler, few provide the load rating that gives peace of mind when approaching the full Gross Combined Mass, and anecdotal evidence suggests the Japanese brand has more experience and testing miles on the Australian continent.” 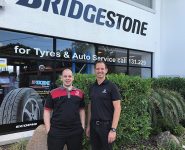 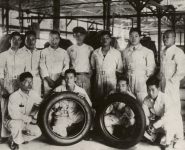 FROM KARUME TO GLOBAL POWERHOUSE