For more than 90 years, Century Batteries has been designing and building its iconic blue and yellow batteries right here in Australia

The company can trace its roots all the way back to 1928, when Century Storage Battery Co Ltd opened its manufacturing facility in the Sydney suburb of Alexandria.
From humble beginnings, Century produced both battery components and finished batteries for the Sydney market.
The very first Century batteries were designed and built in Australia specifically to suit Australian conditions, and this is something the company is still doing almost 100 years later.
By the 1960s, Century expanded its operations into Victoria, South Australia, and Western Australia.
Not only were Century supplying original equipment (OE) batteries to Chrysler, but it was also the first company in Australia to manufacture batteries with polypropylene plastic battery cases.
Up until that point, battery cases were made from vulcanised rubber – just like the tyres on your car!
By the late 70s and early 80s, Century established a new manufacturing facility in Queensland – where it continues to build batteries right to this very day – and began supplying batteries to Ford, General Motors, Nissan, and Toyota.
In the years which followed, Century focused on refining its battery technology and quality standards – achieving ISO 9000 and QS 9000 accreditations and investing heavily in its Queensland factory.

Firstly, in the 90s with the utilisation of automated strip-mill and expander-line equipment, all the way through to today with ‘Sealed Maintenance Free’ (SMF) batteries with grids built using cutting-edge Rotary Expander technology.
But the manufacturing equipment and technologies are just one part of what makes Century batteries so special.
An even greater advantage comes from the benefits of being able to design and then build batteries right here in Australia – in that they can be tailored specifically to suit particular applications, but also be designed to handle the harsh conditions that Australia is famous for.
A marine battery must be able to handle the repeated wave pounding of rough seas off our coastline, while a 4×4 battery needs to withstand the sweltering heat of being under-bonnet on a hot Summer’s day in some of the most remote areas of the country. This sort of refinement can only be achieved through decades of local product testing and development.
The benefit of building batteries in Australia also means that Century has a more consistent supply of locally held stock throughout the year when some other battery importers might be struggling.
The recent pandemic has reminded consumers about the importance of supporting Australian Made products, and Century’s network of 34 distribution centres across the country means that no matter where you are, there is a dynamic supply of stock to service your business and help your customers.

Century says its comprehensive nationwide warranty also means that no matter where your customers travel across this vast land, support and assistance will be available locally should they require it.
In recent times, Century has seen a resurgence of support for locally made products, with many consumers stating that they would be willing to pay more to purchase and support products which are Australian made – because the flow on effects for the Australian economy have never been more obvious.
Thanks in part to its Australian manufacturing facility, Century explains that it currently employs more than 600 people and puts over $100 million back into the local economy every year – with over 98 percent of components from its locally built battery range sourced from Australian suppliers.
Century says it hasn’t gotten to where it is by sitting still, and each year it invests significantly in research, development, and its manufacturing facility to ensure its batteries continue to meet the needs of the marketplace and the next generation of vehicles.
Recent investments totalling over $10 million have been spent on upgrading the Queensland manufacturing facility’s technology and machinery, with further investments slated in the years ahead.
As vehicles become increasingly more complex over the years – incorporating advanced electronics and engine management systems – Century’s portfolio of products have had to evolve and adapt to ensure they continue to satisfy the demands of Australia’s changing car market.

From the latest Stop/Start and Hybrid vehicles, through to Cars, Trucks, 4x4s, SUVs, Boats and Lawn Mowers, Century has a diverse product range to ensure you and your business are well and truly covered with a wide selection of products which offer longer life and superior performance.
To help your business keep pace with the latest changes and advancements in the automotive arena, Century says it also offers resellers access to a comprehensive online battery training program.
It is regularly updated with the latest battery technology and training information to ensure your workshop is powered with the most up-to-date information and skills when it comes to batteries.
Century’s ‘Battery Finder’ portal also enables you to quickly choose the right battery for any vehicle, and even provides fitment instructions and a time estimate for the work – making it easy for you to produce quick and accurate quotes to your customers.
Century is also an active player in the Australian media landscape, supporting several high-profile personalities and organisations, including the Supercars Championship, Supercars Team 18 / IRWIN Racing, Andrew Ettingshausen from Escape with ET, Team Bray Racing, and Australia’s most popular automotive YouTube channel, Mighty Car Mods.
With the help of these activities, Century says it has remained the most recognised battery brand in the Australian marketplace.

For more information on Century Yuasa’s extensive range of products and to understand how your business can benefit from becoming a stockist, contact your local Century Yuasa representative on 1300 362 287. 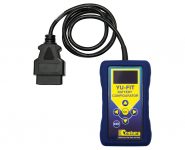 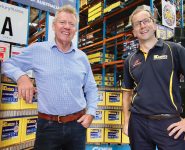 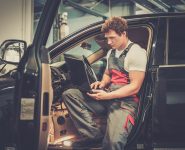