In late December, the Federal Government announced its intention to introduce The Motor Vehicle Service and Repair Information Sharing Scheme to Parliament in early 2021, releasing the legislation in draft form for consultation across January.
The new law will amend the Competition and Consumer Act (CCA) to establish a scheme for motor vehicle service and repair information to be shared with all Australian repairers and RTOs. (Registered Training Organisations)
Its release implements the 29 October 2019 announcement by the Assistant Treasurer, the Honourable Michael Sukkar MP, that a scheme for the mandatory sharing of information would be implemented through primary legislation, providing a fairer playing field for the repair and service of the 74 automotive brands available in Australia in an industry worth $25 billion annually.
The release of the draft legislation followed nearly a decade of campaigning by the Australian Automotive Aftermarket Association (AAAA).
“This new law will make it unlawful for car companies to withhold information from qualified independent mechanics – keeping the cost of replacement parts, vehicle maintenance and repair affordable,” AAAA Director of Government Relations and Advocacy, Lesley Yates, said.
“The AAAA started campaigning for this law a decade ago and during that time, we have worked through two government enquiries and even through a voluntary agreement in 2014 which ultimately failed to resolve the anti-competitive behaviour of some car brands in Australia.
“We are certainly pleased that after all this time, the enacting of legislation which will protect the aftermarket industry and its customers is now only months away.”

Content of the Draft Legislation
The AAAA has examined the contents of the draft legislation closely and provided careful feedback to the Treasury, which will be responsible for finalising the draft law before its submission to Parliament.
“Overall, we are pretty comfortable with the intent of the legislation. It is a competition instrument as an amendment to the CCA which is fantastic because after all, the intention of the legislation is to ensure fair competition,” Lesley said.
“There are some pretty clear obligations for the car manufacturers, but of course upon its release the question on everyone’s lips was ‘are there gaps the manufacturers could possibly exploit?’
“From our analysis, we believe the legislation drafters have done a pretty sound job of anticipating what loopholes might arise and proactively closing them.
“There are also significant penalties for breaching the main obligations of the act – at the highest level, we are talking about 10 million dollars, so that is impressive and makes for a pretty serious piece of legislation.
“It is our belief the intent and the architecture of the draft legislation is strong, and the industry should take some comfort that the foundations are sound.
“As is to be expected with any draft legislation, there are some areas we have felt the need to make comment on, and we have submitted that feedback on behalf of our industry.
“For one, there is some wording we feel is inconsistent with the legislation objectives. For instance, while the objective is to provide fair and open competition, there is mention in the draft of allowing car companies up to two days to respond to data requests. So clearly, this is one area where we have had to provide some input as we feel this delay in providing data goes against the intention of the legislation.
“There are also some constraints around electric vehicles, autonomous vehicles, and telematics. We have had some very productive conversations with the government around this and feel this is a case of better wording being required, so we have provided example alternative language as part of our feedback to assist in these areas.
“The draft law also doesn’t articulate the role of pass-through technology or data aggregators. While they are not specifically mentioned, we can see there is an expectation that they are part of the solution. But even so, we would like to see the draft law be more specific in these areas, especially around pass-through technology, and we have included commentary to explain that pass-through is critical in diagnosis and software updates.
“As a whole, we have to say this draft law is a strong step forward. At the AAAA, we are quite optimistic that we have a constructive relationship with the government, and we have framed our comments in a constructive manner offering good alternatives, and we are very hopeful our suggested amendments will be well considered.”

Next steps
Following the closure of the consultation period, the Treasury is now finalising the draft law ahead of introducing it to Parliament during the Autumn session, at which point the AAAA encourages its members to contact their local MPs to thank them for their support of the law and encourage their ongoing support as it moves through Parliament.
It is important to be aware this legislation could be amended at any time as it passes through Parliament, so the AAAA will be monitoring the legislation’s progress and taking advantage of all opportunities to talk to the Parliamentarians who have been supportive of this law and help to work it through both houses.”
Once passed, the law will officially become active as of 1 July 2022 and between the date the law is proclaimed and when it becomes active, the Scheme Rules will be created.
“The Act provides for an industry advisor to be appointed by the Minister. This Advisor can be an individual or an organisation. There is an expectation this advisory role will be fulfilled by a new industry body which will be formed by two representatives each from the AAAA, the Australian Automobile Association (AAA), the Australian Automotive Dealer Association (AADA), the Federal Chamber of Automotive Industries (FCAI) and the Motor Trades Association of Australia (MTAA),” Lesley explained.
“This body will be known as the Australian Automotive Service and Repair Authority (ASRA) and will work with the government on the design of the Scheme Rules, which will provide data, guidelines and instructions about how repairers can access security and safety information as well as more detail around dispute resolution.
“There will be a lot of work to be done across the second half of 2021 and early 2022 in building the framework, and it is a challenge that we are very excited to be a part of upon the successful passing of this exciting new law.”

To view the draft legislation, go to www.treasury.gov.au/consultation/c2020-128289

If you have questions around the draft legislation, please contact info@aaaa.com.au 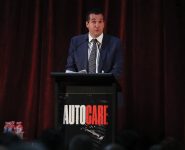 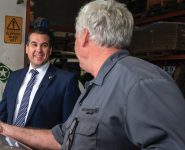 MINISTER CHAMPIONS THE CAUSE FOR INDEPENDENT MECHANICS