DRIVING PASSION IN SPORT AND BUSINESS

From winning an Australian Rally Championship to running a successful family business, Scott Pedder has always been ahead of the pack

These days Scott Pedder is the Managing Director of Pedders Suspension and Brakes, and along with his older brother, Mark, is the driving force behind the family-owned business. But, Scott has a much more interesting and exciting background than your average businessman.
He is an extremely accomplished rally driver having won the 2014 Australian Rally Championship and competed with some success in the World Rally Championship for a couple of seasons. However, his biggest challenge came in 2019 when he stepped out of serious rallying and slid into the driver’s seat of the business his grandfather, Roy, started and father, Ron, expanded.
Scott took over the leadership position in the specialist suspension and brakes franchise organisation from Mark, who had fulfilled the role for a decade and a half. Up until then, Scott’s focus had been more on the marketing side of the business.
“I supported Mark whilst he was Managing Director for 15 years doing mostly marketing as well as anything else that needed to be done and then in November 2019, we made the decision that I’d step up to be Managing Director and Mark would fulfill the Director role that I had been doing for 15 years,” Scott said.
Mark’s has a lot of strengths that I haven’t got, and I’ve got some strengths that he doesn’t, so we decided that the strengths I possess is maybe what’s needed now (in the business), so we changed roles very amicably. I have never had a fight with Mark in my adult life; we had plenty of fights as children and in our teenage years, but never as adults. It was a very quick and easy decision to swap roles.”
With his family pedigree there was no chance he wasn’t going to end up loving cars.

“I didn’t have much choice. My dad took me to a rally when I was about a week old. I grew up with motorsport and with the family business I was always around cars. I probably don’t have the level of passion for cars  some in my family have, but I do love cars and I do appreciate good cars and cars that are done up and cars that go fast and handle well and stop well, so yeah, I’m definitely a motorsport and auto tragic,” Scott said.
Scott never planned on working on the tools.
“I had a different approach to what most in the automotive industry do. I was not technical and I am not a mechanic by a long stretch. I can sort of work my way around spanners, but I went through and did a Bachelor of Commerce at Deakin University and for a time there, I was thinking about being a policeman or a teacher before I got into the business side of things,” Scott explains.
“I really enjoy doing accounting and I particularly enjoy the marketing side of things, so it became pretty clear probably in my first or second year of uni when I was 18 or 19 years old, that I wanted to do something in marketing and that just made sense at that time, so I stepped in and ran the marketing department.”
Scott was always a talented sportsman and driving rally cars wasn’t the first sport in which he excelled.
“My first job was actually as an assistant tennis coach. I was quite a good tennis player as a junior and I started helping my coach. He had a bit of an influx of people wanting to learn to play tennis, so I did some assistant tennis coaching for a couple of years, that was probably when I was 15 or 16, and after then I don’t reckon I had a job that wasn’t related to Pedders,” he said.
Scott describes his management style as keeping things simple and getting the job done without any fuss.

“I’m a little bit old school, probably similar to my dad – just trust your gut,” he said. “A lot of people these days are a little risk averse and want stats and analysis and data and all that sort of stuff and sometimes that gets in the way of making a decision. The worst thing is indecision rather than a bad decision.
“Probably the other thing I am noticing quite a lot is that priority of what you would call operational or job skills over human skills and dealing with people and emotional intelligence, so the advice I have would be just to trust your gut and develop you as a person rather than you as an employee.
“A strength of mine is not accepting the status quo – just because you’ve always done something doesn’t necessarily mean that you have to do it that way forever.
“In the short time that I have been Managing Director, that is what I believe I have added to the business, particularly around management structures and personnel and people. That’s the area I’ve probably done well and done right.”
However, Scott is the first to admit that as a management team he and Mark haven’t always got it right.
“When we look back eight or nine years, we made the very big decision to enter the brake market. We’ve always been a steering and suspension business and even though for 30 or 40 years, everyone’s thought ‘Pedders are brake people’, we weren’t; in fact we actively stayed out of the brake market for a lot of reasons, but we decided in around 2010 to have a go at brakes,” he explains.
“When we look back now, we went against our beliefs and we went against our core strategy, which has been being a specialist and innovative company and selling our own brand. We got a group of great suppliers and great brands that did a great job with us, but essentially, we were doing what everyone else was doing in the brake market and our stores struggled to sell the same products that could be bought from many other places.
“Now we’ve turned that around and we’ve got our own brake partner, our own brake brand and we’re really focusing on that Pedders brand and solutions and looking at niche markets with weight and performance.”

Scott believes the strength of Pedders is its “four brand pillars.”
“They are family, specialists, innovation and quality, but probably to pick one out of there, I’m pretty proud of the family side of things,” he said.
“Specialists is about end-to-end solutions – a lot of people use that specialist tag pretty loosely these days, but I don’t think you can be a real true specialist unless you have total control of your product which we do, from designing it and manufacturing it to in a lot of cases, warehousing, distributing it, doing all the R&D, and doing all the training on it.
“It’s our own product; it’s our own brand, it is sold through our own stores, with our own training…I think our competitive advantage is that total control and then that flows on to the advice, the knowledge, the trust, that whole package. If you are willing to put your name behind your product through your own stores, then you must be all right.”
Scott is proud of the family heritage behind the Pedders brand.
“Family’s everything, it’s what my mum and dad sort of drilled into us and I think Mark and I are doing a reasonably good job of being parents and that side of things is pretty strong, very strong,” he said.
“You hear some terrible stories about family businesses and whether it’s good luck or good fortune or good management, our family’s been exceptionally close. My relationship with Mark could not be stronger. Mum and Dad are not actively involved in the business now, but they are the constant support and our business goes beyond just our core family. My uncle Bill Orders unfortunately has passed away, but he was General Manager a few years ago. His sister, my Aunty, Di is also involved and then we have got lots of other family also involved.
“At Pedders, we do not use that family word as just a cliché, it legitimately is an overall family. But there are so many families within the Pedders business, husbands and wives and sons and dads and that is probably the thing that makes me the proudest to be leading a business that legitimately says what it is: it is an Australian success story, and it is family owned and family run.”

Outside of business, Scott is making a bit of a comeback to rallying after stepping away from the sport in 2017. While the World Rally Championship is in the past for the moment at least, he has dusted off his trusty Renault Clio and plans to enter a few local events and he is also making a comeback to the tennis court.
Scott also now has a family of his own and he enjoys spending time relaxing with them. He has known his wife, Caroline, since he was 16 years old.
“I’m a simple creature; I tend to do things reasonably well once and that’s it, hopefully. But Caroline is involved in the business; the kids are obviously still at school and deciding what they want to do. I’m certainly not pushing any of them into the business and nor is Mark with his two kids, so there is no real succession plan at the moment, although I’m only 44, so there’ll be a while before they kick me out!”

For more on Pedders, visit www.pedders.com.au 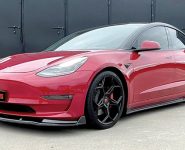 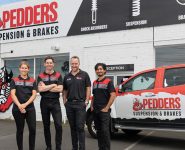 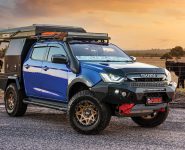