Axle load limits are becoming a more frequent problem with consumers seeking a higher GVM to customise their vehicles to suit their touring purposes.
Dwiz says it has developed replacement housings to suit VDJ 70 series Landcruiser, Nissan Patrol, and 80/105 Landcruiser with an increased load rating of 500kg over factory housings.
Based on years of experience and design and development, Dwiz says it offers not only a heavier rated housing, but also a much stronger housing with the use of its patented inner tube design.
Dwiz says its design process has focused on areas where the factory housing is common to fail and is strengthened at all critical points to give you added piece of mind out in the bush.

Dwiz says its Diff housing is so successful for the following reasons:
• The inner tube and blocking give the housing its strength through a trussing effect at critical points.
• Swivel balls are made from electroless nickel plated 4140 Chrome Moly steel.
• Thicker material used in mounts and brackets.
• Thicker necks at tube to avoid bending.
• Its recovery point is perfect for snatching vehicles out of the bog in sand.

Designs are available to suit models such as the 80 and 105 series Landcruiser, GQ and GU Patrol and 76,78 and 79 series with Super Strong Rear Housing (matching front track width).
Tested in some of the world’s harshest off-road conditions, the Dwiz housing has reportedly been proven time and time again.
Dwiz says you shouldn’t rely on standard housings to make it through the tough Australian conditions and states you should instead install a housing that is fully designed and tested to survive anything you throw at it.

For enquiries and sales, contact Todd on 0450 256 355 or email todd@dwizdiffhousings.com.au 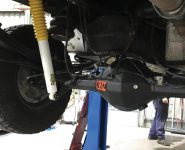 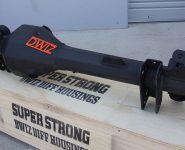