HOW TO DESTROY A NEW TURBO CHARGER IN THREE SECONDS

Anytime a turbo charger is repaired or replaced on a vehicle, Garrett says you must replace the oil feed line.
Due to the oil feed line running close to the exhaust manifold and turbine housing, this will result in a build-up of a baked on carbonised layer on the internal section of the feed line.
This hard deposit material can not be cleaned out effectively by washing or even sand blasting which will result in small particles cracking off during the install procedure.
Garrett explains that on first start up, these particles will be pushed into the turbo chargers bearing system, resulting in failure within seconds and the vehicle will not even make it out to the road from your workshop.
The second way that oil contaminants can enter the turbo is after major engine maintenance where close attention needs to be taken to ensure all oil galleries, supply pipes and oil coolers are thoroughly cleaned and or replaced to stop turbo bearing failure.

Turbo Failure Diagnostics
Before replacing a turbocharger, Garrett says it is important to conduct a thorough diagnostic check of the engine systems and find the root cause of the vehicle’s problems.
A lack of power, noisy operation, excessive smoke or oil consumption could result from a faulty fuel injection system, restricted or blocked air filter, a damaged exhaust system or a lubrication problem.
Also, it recommends that you check the engine crankcase pressure, stating that a higher-than-normal reading can be caused by piston bypass or a blocked breather system, and this requires immediate attention.
The preliminary steps before replacing a turbo are as follows:
A. Question the customer on failure symptoms;
B. Check the vehicle intervention and repair history;
C. Run the vehicle to reproduce claim; and
D. Run the diagnostic equipment as recommended by the car manufacturer; this will allow you to read the error codes of the Engine Control Unit and indicate in which direction to look for the problem.
If the diagnostic check does not uncover any obvious cause, make sure that an extensive trouble shooting analysis is completed on key areas such as foreign objects, lack of lubrication, oil contamination, over-speeding of the turbo and excessive temperature.
This is important because turbo damage can often be a symptom of an underlying problem rather than the cause itself.
Garrett says you should not diagnose turbocharger failure by turbo replacement, as this can be very costly as the replacement turbocharger could be destroyed in seconds if the root cause is not found and rectified.

For more technical information and training, visit www.garrettmotion.com and click on the turbo replacement tab to go to Garrett’s Installer Connect. 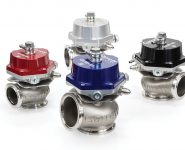 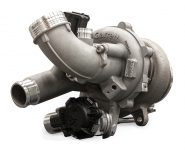 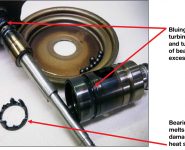 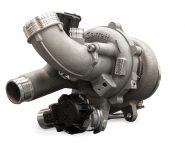