New products are now available to suit Hilux and Amarok

HSP continues to innovate for the Australian market and has recently introduced new products to suit Hilux and Amarok.

Hilux Rugged X Premium HSP Hard Cover
With the increasing popularity of factory enhanced vehicles such as the Nissan Navara N-Trek and Hilux Rugged X, HSP has decided to add another product to its existing Premium Hard Lid range.
The newest edition is the Hilux Rugged X Premium Lid. This lid allows the user to keep their Rugged X bars and is similar to the Sr5 Premium lid.
However, the new lid has some design changes to the side infills which allow for a seamless integration of the genuine sports bars and legs to the HSP hard cover.
Additionally, the HSP premium hard cover has central locking and LED light options, comes painted to suit the factory colours of the vehicle, and can be removed in less than a minute.
“With the popularity of roll tops, we have seen a shift in the way hard covers are portrayed,” HSP Sales Director, Massih Aimaq, said.
“That is why we have made every effort to ensure that removal of these covers is quick and efficient. We wanted to make sure that customers purchasing new vehicles had a large range of products available that may suit their particular needs more.”

Volkswagen Amarok HSP Roll R Cover to suit the Sailplane
Another new product that HSP has recently launched is the Electric Roll R Cover to suit the new sailplane on certain model Volkswagen Amaroks.
The newly released cover allows the factory sailplain to perfectly mount on to the Roll R Cover and due to the slim side rails of the HSP Roll R cover, there are no changes to height which allow for a perfect flush fit.
HSP says the unit is also a world first in that it can be completely controlled via the HSP 4×4 app, allowing the user to fully operate their cover from their Apple or Android device.
HSP states that the Roll R Cover is Australia’s first and only locally manufactured electric roll top with a range of features that put the unit in a class of its own.
“Due to having an internal design lab and locally manufacturing the products in house, we were able to swiftly act on the newly released sailplane and create something that enhances the looks and functionality of the vehicle tub,” Massih said.
HSP is currently expanding its national footprint, recently announcing a large new manufacturing plant in Regional Victoria while also increasing its staff in Metro Melbourne. 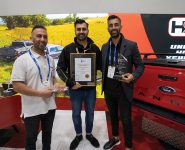 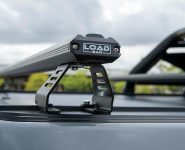