Recently, Australian Automotive Aftermarket Magazine took the opportunity to sit down with Parts 4 Automotive member and owner of Automotive Parts Central, Ben Falcke.
The Falcke family has a long and successful history in the automotive aftermarket, and Ben is actually the third generation to work in the family business.
“It all started back in the 1950s when my grandfather opened a wrecking yard. But it wasn’t long before he added a brake and clutch rebuild service to the business,” Ben said.
The business grew quickly, and Ben’s grandfather started working with Repco and opened two locations in New South Wales in Bathurst and Lithgow.
“We had workshops at both locations,” Ben explained. “We’d sell automotive parts to local workshops as well as completing work on a large variety of vehicles including passenger, commercial, industrial and agricultural machinery.”
Ben’s father had already joined the business at this stage, and after cutting his teeth in the workshop and behind the counter, he recognised the value of focusing their efforts on expanding their product range.
“It was a tough decision, but we decided to close the workshops at both stores,” Ben said.
“It was a real turning point for the business as we quickly grew our product range, and we quickly developed a reputation for quality service and advice with the local workshops in both regions.”
Staunchly independent, Ben and the rest of the Falcke family know how hard it is to battle against the larger automotive parts chains.
“We ran the only independent automotive parts stores in both regions,” Ben said.
“It’s hard work competing with the big multinational companies, especially on price. Sometimes we struggled to get a fair deal from wholesalers and importers.”

It’s a story played out time and time again. Independent automotive parts stores across the county really struggle with volume, and some of the bigger parts suppliers often ignore them.
“We started looking around for a group that would help us increase our buying power, as well as recognising our commitment to remaining independent, and that’s when we discovered Parts 4 Automotive,” Ben said.
Parts 4 Automotive has more than 70 members across Australia, all of which enjoy the benefits of being part of this powerful buying group while at the same time remaining fiercely independent.
“The Parts 4 Automotive model is extremely attractive,” said Ben.
“It allows members to purchase stock at competitive pricing, provides them access to marketing and promotional activities, and above all, helps secure their future in this extremely competitive industry.”
In addition to providing access to a more extensive range and more competitive pricing, Ben has come to appreciate the camaraderie that is shared between the group’s members.
“One of the biggest things I value as a Parts 4 Automotive member is meeting other like-minded people,” said Ben.
“We all do the same thing in the same part of the industry, but we’re not competitors, so we’re there to support each other’s business.”
Parts 4 Automotive members enjoy frequent regional meetings, in addition to being invited to an annual, national conference and trade show, so there are plenty of opportunities for members to connect.
“The Parts 4 Automotive member functions deliver real value,” Ben said.
“They encourage networking, and I find that I get a lot of support and advice. We share tips and tricks and all sorts of stuff that I can take back to my business and action.
“Obviously, my business operates in regional areas, and there are no other independent resellers in Bathurst or Lithgow, so it’s always nice to be able to talk to someone else in the industry and bounce things around.
“You just don’t get that opportunity when you’re going it alone, and in the past, that made me feel quite isolated.”
Ben and all the Parts 4 Automotive members understand the value of their independence.
“Not many people realise the value independents add to the automotive aftermarket,” Ben said.
“We help strengthen the industry as a whole. Consumers benefit because we provide more competition against the big boys. This increases the level of service and ensures pricing stays competitive, and that’s a good thing for customers everywhere. Basically, we help to level the playing field.”
Parts 4 Automotive members also receive financial advantages, primarily by supporting their extensive list of preferred suppliers.
“Being a Parts 4 Automotive member also means I get access to an attractive rebate program that is easy to manage,” Ben said.
“All I have to do is support our preferred suppliers and pay within their trading terms. The team in the Parts 4 Automotive office looks after the rest, and I just get an annual check. It’s that easy.”
Since joining the group in 2017, Ben has reported strong growth in both sales and profitability that he attributes directly to the increased product range and buying power that Parts 4 Automotive members enjoy.
“For me becoming a Parts 4 Automotive member has added real depth to my business,” Ben said.
“I have access to more products and better pricing, and that, combined with the member support network, will secure the future of my business for decades to come.”

To find out more about the benefits Parts 4 Automotive delivers to members, contact Kim Mamouney on 0418 532 307 or kim@parts4.com.au or visit www.parts4.com.au 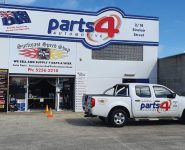 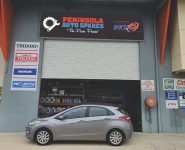