Nothing should get in the way of a good adventure, especially not the fear of damaging your 4×4 on the road less travelled.
The idea for Rhinohide started more than 20 years ago when Marc Berryman completely scratched up his parent’s brand new 4×4.
After getting a major dressing down, Marc figured there had to be a better way and asked: why shouldn’t you be able to take these cars off-road, when that is what they are made for?
Marc set about making tough body armour that was also easy to put on and take off, and in early 2016 Australia saw the release of an innovative new idea for 4WD enthusiasts: Rhinohide.
When Rhinohide was launched, it offered a robust 4WD paint protection system that allowed users to venture down the tightest of tracks and explore the most challenging conditions before emerging with their paintwork unscathed.
The Rhinohide product got national coverage with its debut on Australia’s Shark Tank and piqued the interest of not one, but three of the ‘sharks,’ resulting in Marc taking investment from Dr Glen Richards and Andrew Banks.
Options were offered for many popular 4×4 models and the product even won SEMA’s Global Media Award in 2019.

And now, a new phase is launched
The small Australian company’s initial concept used magnets to hold the custom moulded high impact ABS panels to the vehicle.
The magnetic system, whilst capable, did have some limitations – in particular, it could not be used on the highway and also required routine maintenance and cleaning.
Because of this, in 2020 under the restraint of the COVID-19 lockdown, the Rhinohide product development team went back to the drawing board to overcome these issues.
The team spent almost 12 months undertaking extensive research and development to redesign the system from the ground up.
The final version was given an extended torture test by famous 4WD/Overlanding influencer Ronny Dahl, with Rhinohide kitting up his rigs with the new Rhinohide Armor while telling him to “give it hell!”
“We are pleased to report that the new product stood up to all the painful testing and is a huge step forward, making Rhinohide the clear leader in removable 4WD protection systems and the only available system that is rated for Highway (speeds of up to 130km/hr) as well as off-road use,” Rhinohide Founder, Marc Berryman, said.
“It is also the only system which allows paintwork to breathe and avoid chaffing from the system itself thanks to a unique air gap between the panel and the paint surface.
“The panels are the clear class leader in attachment technology, with their new Armor-Lock Attachment providing impact absorption through a patent pending ‘shock absorber’ built into the mechanism.
“The system is also the only detachable panel protection system to have a security fastener with tamper-proof key to give peace of mind against it being stolen when parked in carparks, something no other magnet system can compete with.
“It really is the world’s toughest panel protection system.”

Seeking stockists
Rhinohide says if you would like to become a stockist of the new Rhinohide Armor system and help your customers explore with freedom while adding good margin to your monthly revenues, you should get in touch with its sales team via sales@rhinohide.com.au

To find out more, visit www.rhinohide.com.au 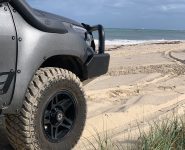