HSP says it is proud to announce its latest innovative update to the popular Roll R Cover range of roll tops.
The HSP Roll R Cover is now compatible with Android and Apple devices.
The update was launched last month and has been added as a complementary feature on all HSP Roll R Covers sold since the 15th of June.
With plenty of smart integrations in our current day and age, the bulk of which are ‘smart home’ integrations, HSP says having the first Smart Roll Top in the market is an enormous step towards the future of vehicle accessory development.
The integration works via an App available on the Apple App Store or Google Play Store which allows the user to open, close, pause and operate the built-in LED light of the HSP Electric Roll R cover, all via smartphone.
Customers who have an Apple device can even take further advantage of voice command via Siri on their iPhone, Apple Watch and Air pods.

“HSP is proud to be pioneering the development of vehicle accessories. We have positioned ourselves as one of the leading innovators in this category with the first electric roll top in the Australian market which is now also the first ‘smart’ roll top in the market,” HSP Sales Director, Massih Aimaq, said.
“What is even better is that HSP has kept all of our roll top manufacturing in Australia which has meant jobs have been kept in Australia – this is another achievement we have been very proud of.
“As we celebrate this exciting new update for the Roll R Cover, we wish to also say a special thank you to the AAAA for the assistance they have given HSP over the years – it has been greatly appreciated and we are excited about what lays ahead.”
HSP has a few more products that are currently in the pipeline and due for release over the next 12-15 months, so the company is also actively looking to expand its network.

For more information on joining the network, the HSP Roll R Cover or any HSP products, visit www.hsputelids.com 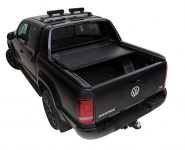