Pliers are among the hand tools that automotive and industrial mechanics use every day, but that doesn’t mean they have to be mundane.
Instead, GEARWRENCH says it is proud to unleash its new line of PitBull Pliers designed with features and functionality that it says will quickly turn them into a mechanic’s best friend.
“Professional technicians we talked to said that the most important things they looked for in their pliers are grip and cutting ability,” GEARWRENCH Product Manager, Steven Tokouzis, said.
“We know they’re cutting day in and day out and we know that grip is critical to getting the job done. Those two goals are at the core of everything we put into our PitBull Pliers.”

Solid-Joint Pliers
GEARWRENCH says professional technicians can now cut with 35 percent less force thanks to the pivot-forward design and laser-hardened cutting edges of all four GEARWRENCH PitBull Solid-Joint Pliers (linesman, long-nose, universal and diagonal).
It says the innovative designs also translate to 50 percent longer cutting life, meaning techs aren’t replacing their pliers over and over once they’ve gone dull. All four styles are available in dipped handles for easy cleaning.

Previous: BURSON IS “BIGGER IN BATTERIES”
Next: VALEO REGLOSCOPE PRO 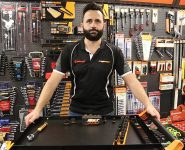 OUTSIDE THE COMFORT ZONE