Ariazone says that twenty years ago, following 15 years of research and development, The Refrigerant Company pioneered the use of PAO-based oils in refrigeration.
In June 2006, Ariazone International and The Refrigerant Oil Company joined forces, and now it explains it is pioneering PAO-based lubricants for thermal management in hybrid and electric vehicles.
It explains it is doing so because the users of the products have found they recognised the advantages of the stability, purity and lubricity of polyalphaolefins (PAOs) for the industry.
Further, the electrical properties of PAO make it suitable for high voltage electrical systems, it says.

Why should you use PAO-based Oils (PAOIL) in your workshop?
Ariazone says there are many reasons you should consider using PAOIL in your workshop, including:
• PAOIL is useable with all automotive compressor types including hybrid vehicle compressors.
• PAO is also compatible with R134a and the new R1234yf refrigerant, meaning you only need one oil to use for most auto A/C applications.
• PAOIL is suitable for the use in hybrid and electric vehicles (AA series is preferred but PL series may be used).
• PAOIL has a high Viscosity Index meaning that the oil maintains its viscosity and lubricating properties at high operating temperatures.
• Unlike other lubricants PAO is nonhygroscopic: it does not readily absorb moisture.
• The special packaging and equipment needed with other oils to ensure that moisture does not enter the refrigeration circuit along with the oil is not necessary with PAOIL.
• Due to the inertness and inherent stability of PAO, PAOIL has a five-year shelf life.
• PAOIL is also available with an added UV dye to help with leak tracing.
• PAOIL is universal: you need to stock one, rather than carry many different types of oil.
• Safe to use: PAOIL is a non-hazardous, non-toxic product safe to have around the workshop. It is also safe on painted surfaces, so there are no worries if it is accidentally spilt on vehicles.
When it comes to the differences between the normal and the UV versions of PAOIL, Ariazone explains the PAOIL PL series offers the same positive properties as the PAOIL AA series, meaning it can be used as a complete oil replacement for A/C systems.

PAOIL = Money Saving
Ariazone explains that with PAOIL you can buy in bulk* and with its five-year shelf life, not worry about the oil being unusable a couple of hours after opening.
It says you also do not need to stock multiple types of oil when using PAOIL, since PAOIL is suitable for use with a wide variety of automotive compressors and refrigerants. As such, it says that PAOIL helps you to save money.
Ariazone and The Refrigerant Oil Company are based in Melbourne and are part of the ROC Group. They are fully-owned Australian companies with products currently used in workshops in more than 40 counties worldwide. 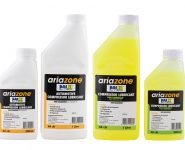 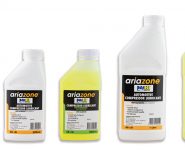