It is not just the shaved head or giant smile, but the man’s energy and enthusiasm that sets him apart.
Rob Herrod gets things done.
In recent years he has been the driving force behind the Ford Mustang in Australia, helping to develop and then build a string of limited-edition ’Stangs including the factory-backed R-Spec and 578-kiloWatt SM17 created to celebrate Scott McLaughlin’s three consecutive wins in the Australian Supercars championship.
Along the road he was also responsible for re-opening a section of the derelict Ford Australia factory in Broadmeadows to get the 500 R-Spec cars built the right way at the right time.
“We are Mustang. That is what we do,” Rob said.
“Our place is flat-out doing work on new Mustangs. I love that car.”
But Rob is not just a Mustang man. His first car was a Holden, but it did not take him long to accept the wise advice of his father, Jack, who got him started as his apprentice more than 45 years ago.
“My first car was an HJ Holden. But my father said, ‘one day you’ll see the light’ and it did not take long before I was driving a Ford,” he recalls.
In the world of Ford, Rob is much more than just a tuning shop owner from the gritty Melbourne industrial suburb of Thomastown.
He is on first-name terms with the heavy hitters with Ford Performance in Detroit, USA, as well as a celebrated and welcome Aussie ambassador at the landmark SEMA show – for the Speciality Equipment Market Association – which is held every year, except for the COVID-19 hit 2020 event, in Las Vegas.
When Ford staged a top-secret preview event to celebrate the return of the heavy-hitting Bronco off-roader, Rob was one of the celebrity guests.

Before the Mustang and Bronco, there were many, many Falcons over the years and one of Rob’s most-influential mentors was the late Howard Marsden, who was Head of Motorsport at Ford Australia and got him involved on some side projects.
Rob has many fond memories of Howard and he, like Ryan Story and Dick Johnson today, helped him believe in himself and his ability.
That ability has made Herrod Performance the largest Ford Performance outlet beyond the USA and earned him a place with the decision makers at Ford’s go-faster division in Detroit.
In the case of the Mustang, he has been able to tap into a special parts pipeline, as well as the inside knowledge of how to improve the car.
Surprisingly, there are only six staff at Herrod Performance, although the workshop has all the right stuff.
“We have five hoists, a dyno cell, a separate engine room, and even a decal area. It’s a pretty big place,” Rob says.
The shop has just been fully updated with an impressive new floor that makes it look brand-new.
“Presentation is very important. I want people who come to the shop to get that warm fuzzy feeling when they arrive,” he says.
“They need to know that professionals will be working on their vehicle. The factory might be 22 years old, but I am always doing updates to ensure it looks brand-new.
“I don’t cut corners. I spend money where it is needed.”
It is the same for the cars and the parts. Herrod can supply everything from stickers – “we give those away for free” – to a crate engine from Ford Performance.

“Our main game is that we get customers who say to me ‘I’ve bought a mustang, what can you do for me?’,” says Rob.
“Some people might have two grand to spend, others might have 50 or 60 thousand. No two are the same.
“So, we build them an individual car. And everything I do I try to keep within the rules and regulations. We do not build hoon cars.
“We now have four vehicles with second-stage manufacturer’s status. Even if we are just fitting a supercharger, it goes with an engineering report.
“That’s one of the things I’m very proud about and it’s very important.”
In the last two years, Rob’s reputation has helped to forge close ties to Ford Australia and the DJR crew on the Gold Coast.
The result was a series of three cars which raise the bar for the Mustang in Australia.
They are the R-Spec Mustang sold as part of the official dealer range, the limited-edition SM17 that was a sell-out with 50 cars in Australia and another 30 in New Zealand, and the ultra-rare Ford Mustang Dick Johnson Limited Edition.
The king-of-the-road Mustang is the most powerful road-registered ’Stang in the world, with a whopping 635 kilowatts of power and the rest of the mechanical package to match.
Only 30 were built, with a price-tag more than double a basic Mustang, but they were sold out in a couple of weeks.
“I’d have to say my pride and joy was the Dick Johnson Limited Edition. That car is unbelievable, from the power to the special logos that are engraved onto parts of the engine,” Rob said.

“It is something else. It is an unbelievable thing. Some people who told me it’s so good it doesn’t even feel like a Mustang.”
But Rob is most proud of the R-Spec, one of the rarest Mustangs of all time.
There are plenty of Ford tuners, but Rob knows that only he and the legendary Carroll Shelby have been officially sanctioned by Ford to build a car that sits as an official model in their showrooms.
“To have a collaboration with Ford Motor Company and have your own production car for Ford Australia is pretty amazing. It’s built to Ford’s standards, Ford’s quality, to give them exactly what they wanted,” Rob said.
“And to have it built in part of the old Ford factory was also pretty special. To get that up and running to build the 500 cars was a real project.”
Rob is 60 but still has his foot down hard on the go pedal, even if he knows his future projects – and there are a few – will have to be very, very special to top the R-Spec.
“That car is the pinnacle of my career. I feel like I’ve done something no-one else can do,” he said.
“How many people can say they created a car and then built it? And did it with Ford?
“Wow. Sometimes I have to pinch myself.” 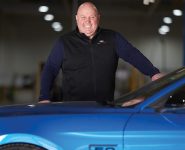