Garrett Advancing Motion says it is excited to release the new Powermax direct fit performance charge air cooler for the Ford Ranger and Mazda BT50.
Garrett Advancing Motion says it boasts a 218 percent larger core, which helps reduce intake manifold temperatures by an average of 32°C based on test data.
Optimised end tanks improve air flow through the core and Garrettt Advancing Motion says this direct fit performance intercooler installs in 2.0 hours and reuses the stock bolts, hoses, and clamps.
Due to the modern ECU torque controlled modern turbo diesel engines, you will not gain power and torque by fitting an intercooler on a dyno without a ECU remap to take advantages of the cooler air inlet temperatures, says the company.
It says where you will gain power with the standard ECU settings is when the turbo is under load four wheel driving or towing with a compressor outlet air temperature at 135oC.
It says the Garrett Powermax Intercooler comes into a world of its own, lowering the inlet temperatures further by an average of 30oC to OE, giving the driver the constant power band right through their driving experience.
Key features:
• Supports up to 499 kW
• 218 percent larger core than stock
• Installs in stock location
• Cast aluminium end tanks
• Advanced offset fin design
• Bar-and-plate construction 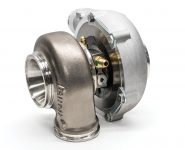