Most mechanically minded diesel vehicle owners have tried a variety of fuel additives, often purchased at service stations or automotive supermarkets.
And justifiably, there’s always been a lot of scepticism surrounding the use of fuel and oil additives because the sales pitch and advertising on these additives often makes claims that they simply don’t deliver on, leaving the vehicle owners disillusioned about their effectiveness.
Yet today, Responsive Engineering says Common Rail Diesels suffer more from fuel quality issues due to their precision, high performance engines, high fuel pressures and high operating temperatures than ever before.
Compared to older technology diesel fuel systems, Common Rail Diesels are totally unforgiving when it comes to any type of fuel contamination, explains Responsive Engineering, which explains very small amounts of water or particles will wreck pumps, injectors and throughout the whole fuel system. And, it says, they’re pretty much non-repairable, so that means all new components.
Added to this, CRD engines have been developed to meet the modern emission standards, and diesel fuel sulphur has been reduced for the same reason. But low sulphur fuel happens to compound another problem: lubricity. At a time when pumps and injectors rely even more on diesel fuel for lubrication, it has been actually reduced in the fuel, says Responsive Engineering.
Responsive Engineering says a fuel additive that will protect all these parts has never been more important, and states that it has developed and produced here in Australia a fuel additive specifically designed to keep Common Rail Diesels performing like new.
The Responsive Diesel Fuel Lubricant and Conditioner lubricates moving parts and provides anti-corrosion protection for diesel fuel pumps, injectors and all fuel system components.
This fuel lubricant and conditioner contains a powerful Nano formula that has been specifically designed for diesel engines, with a focus on Common Rail fuel systems which also has an anti-bacterial biocide in the formula to protect the whole fuel system.
Responsive Fuel Additive does not contain hygroscopic dispersants which Responsive Engineering says is often found in major brands of fuel lubricants. These dispersants don’t remove water from fuel, instead they just make it less visible and because it is still in the fuel it can flow past filters and water detection units where it causes catastrophic damage in diesel vehicles, warns Responsive Engineering.
Responsive Fuel Additive can reportedly quieten rattly injectors, reduce emissions, and improve fuel consumption and the overall performance of your vehicle.
Because it is a specialised product, it is only available from specialised diesel repairers or direct from the manufacturer – Responsive Engineering.
The bottle has been designed to fit into the door pocket so it’s always in the vehicle (not sitting in the garage at home) and the concentrated formula of 150ml will treat up to 2400 litres of fuel.
It is available from Responsive Engineering, located at 64 Kembla Street, Fyshwick in the ACT.

Previous: JLM GDI INJECTOR CLEANER
Next: BACK ON THE ROAD 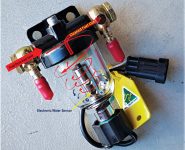 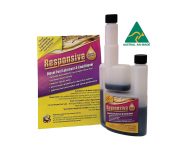