Starting out as a mechanic, working in engine reconditioning at the early age of 15, Tim Tredrea has always had a knack for tools.
He first heard of Snap-on from a friend who had seen how the franchise worked in Canada, and it didn’t take long before the then 21-year-old was visiting Snap-on’s HQ, which was in Brisbane at the time, to get started.
He decided to set up his franchise in Tamworth in New South Wales, and 30 years later he’s still there and very much a cherished member of the community.
It wasn’t an easy start though in the early 90s, as the economic conditions weren’t favourable.
“A business starting up then wouldn’t have been a great idea,” reflects Tim.
But Snap-on says if there’s anything to learn from Tim’s experience, it is that the business model has stood the test of time and economic upheavals.
“Every year I never look back, I’ve had steady growth nearly every year that I’ve been in business,” Tim said.
When asked about what makes Snap-on different to other franchises, Tim shares two main points: the level of service and the product.
“Regular calling makes a big difference. Franchisees get support from the Snap-on group, and this attention to service extends to the customer,” he said.
“It’s about service and customer relationships, but it’s no walk in the park.”
Turning up consistently and reliably for customers creates a win-win situation, and doing it for as long as Tim, you can see how customers remain loyal.
“It’s a face-to-face business, where most companies now are going online. I think our way of doing business will prevail at the end of the day,” Tim said.
Building a strong client base in the region, Tim has been able to grow the business by adding two staff members and another truck to his operations.
Tim’s long-standing relationships with his customers and knowledge of Snap-on tools have helped his staff expand the service, and “everything just follows on because all the groundwork is there.”
Snap-on says its products are a major benefit to any workshop – in particular, the testing and diagnostic tools.
Tim has seen significant change from the introduction of diagnostics by Snap-on Tools early on in the industry.
“The mid-90s was when Snap-on developed US software for Australian vehicles. We find that because we’ve been here for so long, we started a lot of our customers with Snap-on diagnostics, and they’ve been very brand loyal,” Tim said.
Reflecting on some of his proudest moments since joining the Snap-on family, Tim remembers the big achievements.
In the mid-90s, his franchise was recognised as number one in Australia for top sales in the year. Ever since then, the business has pushed further and remained amongst the top in the industry. His two staff members, Brendan and Jay, are also recognised as number one and ten, respectively, in the country.
Tim highlights the hard work and consistency involved in keeping the business going, whilst his family, with a special mention of wife Michelle, have been a pillar of support.
“You’ve got to be all in with support on all fronts,” he said, stating that ultimately it pays off – even with the impacts of COVID-19, the business was only off the road twice for a couple of weeks in the last two years.
Snap-on is a leading manufacturer of premium tool and equipment solutions. The unique franchise model transports Snap-on’s tool range direct from workshop-to-workshop via dedicated franchisees like Tim Tredrea.
Snap-on invites you to become a franchise owner with Snap-on Tools to drive your own success and discover how to be a part of one of the longest-running, successful franchises in the world.

For more information, visit www.snaponfranchise.com.au or start your conversation on 1800 810 581. 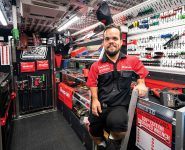 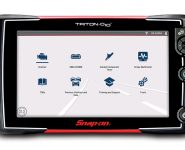