The 34th edition of Summernats (Summernats 34) has been rescheduled to January 2022, but as always the Summernats team is moving forward positively and has announced an exciting program of events for 2021.
“Summernats has made the difficult decision to re-schedule Summernats 34 to January 2022,” Summernats Managing Director, Andy Lopez, said.
“ACT Health is using Exhibition Park as a COVID-19 testing facility until the end of November and can’t confirm we’ll have our venue back, which is an unmanageable risk to our event. Combined with ACT Health’s recently released protocols that exclude outdoor multi-day festival events of more than 5,000 people, a pathway to a January Summernats is impossible.
“We’ve fought really hard for our event for the last six months, but we just can’t find a way to get it over the line. Our team is very disappointed, the street machine community is devastated, and the same goes for our loyal staff, contractors, and the accommodation, hospitality and associated businesses that normally benefit from the $30m the ‘Nats brings to the ACT economy every January.
“But everyone across Australia is suffering, and ACT Health and other agencies are doing their best to keep everyone safe. We respect the great job that’s been done to get the ACT to such a good position.”

While Summernats attracts over 100,000 auto fans and 2,000 vehicles to Canberra’s Exhibition Park each year, organisers will be staging a reduced capacity Summernats-style event – Summernats Rev Rock ‘n’ Roll – in March as part of its national program of COVID safe events.
“The Summernats isn’t in the doom and gloom business, we’re in the good times business, so we’re moving forward and announcing a calendar of exciting, COVID-safe events for 2021,” Andy said.
“This includes the new Summernats Rev Rock ‘n’ Roll festival at EPIC in March, and we’ll be bringing the full Summernats festival back to Canberra in 2022.
“We’ve just delivered a sensational Red CentreNATS in Alice Springs on Fathers Day and staged our first Burnout Masters event at Sydney Dragway the week after. We proved to ourselves and our fans that we can do COVID-safe events and still have a great time.”

The full Summernats 2021 national program of COVID-safe events has been confirmed as the following:
• Summernats Slam – Sydney Dragway January 8 – 10, 2021
• Meguiar’s MotorEx – Melbourne Showground February 6 – 7, 2021
• Summernats Rev Rock n Roll – Canberra March 5 – 7, 2021
• Rare Spares Rockynats – Rockhampton April 2 – 5, 2021
• Red CentreNATS – Alice Springs September 3 – 5, 2021
More info on each of these events can be found at www.summernats.com.au
“We want to thank our partners, including Street Machine, Rare Spares and all our fantastic sponsors for sticking with us through this process,” Andy said.
“Most importantly, a huge thank you to the Summernats faithful, the guys and girls who bring the cars, and the fans who come to appreciate them every year.”
Spectators and entrants tickets already purchased for Summernats 34 will be transferred to the 2022 dates, and all purchasers have been sent ticket transfer and refund info. 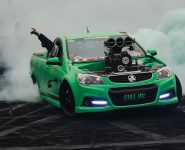