SuperPro says choosing the right polyurethane bushing brand is key as although poly bushings are reportedly perceived as superior over rubber bushings, it says each brand is different.
SuperPro explains its poly bushings are specifically designed for each application and include proprietary design and material features, unique only to SuperPro.
According to SuperPro, no polyurethane bushing is made equally and all of the normal design flaws generalised and associated with poly bushings are non-existent in SuperPro bushings.
Polyurethane Bushing Overview
Poly bushings are the relatively new kid on the block in comparison to the broader history of the automotive aftermarket industry. Traditionally polyurethane has been associated with being a hard material, giving excessive NVH (Noise, Vibration, and Harshness).
SuperPro says that while the cost of buying some brands of poly bushes may be significantly more than an OEM rubber bush, if designed correctly for its application they can save you money in the long run with a long service life and performance that doesn’t degrade over time.
According to SuperPro there are very few poly bushing manufacturers that create a decent bushing using material, engineering and manufacturing to create the perfect suspension bushing. That is why it says it is so important you find a suspension manufacturer that knows what they are doing.
Ride Quality
SuperPro says its poly bushings offer a firm ride, yet still supply a comfortable driving experience through a responsive drive. Due to SuperPro bushing design features, the company says there will be no increased noise, vibration or harshness (NVH). As such, it says if you’re looking for better driving performance, direct steering, long service life, sharper and more responsive handling, then SuperPro poly bushings are the best solution.
Engineering and Manufacturing
SuperPro says a lot of time, effort and thinking goes into a polyurethane bushing, especially a SuperPro poly bushing, due to the complexity of material and also manufacturing process behind a SuperPro Poly bushing. The material design has to be perfect in order to supply a bushing which will perform in all conditions and SuperPro bushes are reportedly designed to fit an exact parameter of housing dimensions.
SuperPro poly bushes are designed and manufactured in Australia and SuperPro says it basically takes an OE bushing and analyses it completely to see what it can do to make it the best possible suspension bushing. This includes adding design features for fitment, long service life and correct alignment issues not addressed by rubber bushings. 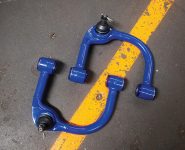