Last year’s pandemic did not stop SWAN Ignition Coils from expanding its ignition coil catalogue, with the company adding some new performance vehicle coils to its range.
As part of the new range, part number IC517 runs the 2018 Hyundai i30 N Performance variant. The i30 N has a 2.0L turbocharged i4 engine that puts out 202kW of power and 378Nm of torque (on overboost).
Part number IC492 runs the 2015 Toyota 86, which uses a 2.0L Subaru Flat 4 engine (without a turbo), that puts out 147kW of power and 205Nm of torque. This car is popular with Toyota car modification enthusiasts.
Part number IC274 runs Toyota’s performance version vehicles that use the 3.0L twin turbo 2JZ-GTE engine, as found in the fourth generation Supra made popular by the Fast & Furious movies.
The engine boasts 206kW of power and 432Nm of torque for the Japanese market, while power in the overseas version was increased to 239kW and 441Nm (VVT engine 451Nm).
Part number IC70806A is an upgraded performance coil for Holden vehicles running the LS3 engine, the coil is originally found in the Corvette LS7 engine. The LS3 outputs 317kW of power and 575Nm torque (HSV variants were upgraded to produce 325kW), while the LS7 produces 375kW of power and 640Nm of torque.
The advantage the LS7 performance coil has over the stock standard LS3 coil (can also replace the LS2 coil) is a bigger spark that improves power and acceleration.
Higher voltage allows for a larger spark plug gap that delivers a larger spark, resulting in a stronger initial combustion, it also bridges the spark plug gap faster.
While higher voltage helps improve performance, it is not the only reliance, more so the key is to maintain voltage under load. So importantly performance ignition coils need to function consistently, maintaining voltage throughout the acceleration range.
This is achieved by the internal construction of the coil by way of heavy gauge windings and more windings per coil.
SWAN Ignition Coils says this new release of performance coils has been made possible by its ever-increasing brand awareness and customer confidence in its quality; as such its customer base ranges from public to trade and reseller.
SWAN Ignition Coils says resellers can also benefit from its launch last year onto AutoInfo’s online catalogue Oscar, where resellers can purchase its coils along with brake pads and fuel pumps/modules. Coinciding with the AutoInfo launch, the company has also expanded its coils into the New Zealand market.

Trade and public customers can also buy direct via www.acaparts.com.au. Later this year, SWAN Ignition Coils will also be launching a new sales site, so it says you should keep a lookout for www.swancoils.com.au 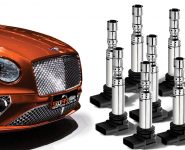