Australian 4WD parts brand Terrain Tamer has recently opened an exciting large-scale branch in the Cape Town suburb of Bellville to service the wider African community.
Still owned and operated by Frank Hutchinson, who started the company in Melbourne in 1969, Terrain Tamer’s origin was found in supplying 4WD parts to tour operators who took tourists through rough, uncharted terrain in the Australian outback, to destinations such as Uluru.
The company now boasts a product range of over 40,000 unique part numbers, essentially formed by parts that will keep a 4WD running, right through the gearbox, transfer case, CV joints, filters, suspension, bearing kits, brake, clutch and thousands of other parts.
Terrain Tamer says each one goes through rigorous research, development and testing to ensure it is at least equal in quality and strength to its original equipment equivalent before it can bear the Terrain Tamer stamp, often far exceeding the required standard.
Terrain Tamer says this proven reliability means its parts are now used in mining, military, farming and emergency service applications, as well as by recreational 4WDrivers in over 80 countries around the world.
Operating for more than 50 years, Terrain Tamer now has branches in every state of Australia, as well as New Zealand, Fiji, Papua New Guinea and France. The South African warehouse becomes the seventh international warehouse for the company, and will be managed by Marinus Potgieter, an experienced 4×4 business owner who has previously acted as a Dedicated Stockist into the area for Terrain Tamer for the past five years.
The new warehouse will service the South Eastern African countries, while the North-Western African region will continue to be serviced by the company’s French warehouse. 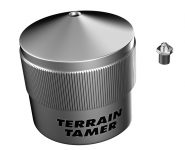