The most advanced engine oils on the market are now derived from natural gas, says Shell

Shell explains that these oils offer high performance with virtually none of the impurities found in crude oil, making them perfect for those competing at the highest level in motorsport and the everyday driver.
One of the most recent innovations in motor oil comes in the form of synthetic motor oil made from natural gas. These oils are made with PurePlus technology and the Pearl gas-to-liquid (GTL) plant in Qatar is the world’s second largest source of them.
Shell explains that the Pearl GTL plant is a partnership between Shell and Qatar Petroleum where they have dedicated a substantial amount of time to perfecting the GTL process.
This breakthrough process converts natural gas into a crystal-clear base oil with virtually none of the impurities found in crude oil.
Shell explains that base oils made from crude oil have performance limitations; they contain impurities and weaker molecular bonds that can limit performance.
Shell says that its Shell Helix Ultra product, for example, is a GTL engine oil that uses ‘PurePlus Technology’, which when compared to traditional group II and group III base oils, provides enhanced viscosity, friction reduction and long-lasting engine performance.
Shell has long used the motorsport arena as a test bed for its engine oils. The company’s rich history in this space started with Ferrari in 1929 and has since spanned a wide variety of global competition; from F1, to MotoGP, the World Rally Championship, Supercars and Formula E.
Collaboration between scientists and motorsport engineers in the competitive environments of motor racing are the perfect recipe for producing revolutionary engine, transmission, and gear oils. The learnings can then be taken from the track and applied to the development of motor oils for the everyday motorist.
For instance, a Formula One power unit can exceed temperatures of 1000oC and demands on the engine are huge. The race lubricant used by Scuderia Ferrari is vital to the cleaning, protecting, lubricating, and cooling of the engine, while delivering improved performance and efficiency.
The role of the engine oil developed specifically for Scuderia Ferrari is therefore identical to the role of lubricants in any car on the road, says Shell.
Shell says that engine oils made with PurePlus technology have stronger molecular bonds (1) when compared to base oils derived from crude oil, which makes them more resistant to extreme temperatures in the engine. The technology also reportedly offers superior cleansing and protection for today’s engines – protection that exceeds industry standards, keeping critical engine components cleaner.
It is not just the testimony of Scuderia Ferrari that supports the case for this technology, says Shell, with Hyundai Motorsport also leveraging the technology to support it in the World Rally Championship (WRC).
WRC offers a unique challenge for these oils with competition events taking place in an array of conditions; from snow and ice, to gravel and asphalt with temperatures ranging from -30°C to +40°C. These different environments mean that the car and engine reliability are put to the test and safeguarding against power loss is magnified.
Oils made from natural gas also have qualities that help the everyday motorist as their lower viscosity at cold temperatures supports quicker engine warm up from cold starts.
Shell says that with the long-lasting performance of your engine that comes with an oil like Shell Helix Ultra, your car will run and feel like new every time you use it.
Shell Helix Ultra can be used for gasoline, diesel, and gas engines, and it is also suitable for biodiesel and gasoline/ethanol fueled cars.
Further to the above, Shell Helix Ultra is now carbon neutral (2) across Europe, Asia-Pacific, and the Middle East. Shell says this provides mechanics and consumers with a more sustainable choice of motor oil without compromising the high performance and engine protection that has made Shell Helix Ultra renowned around the world.
Shell says it has been advocating for and developing PurePlus technology for some time now, not just because of its applications at the top end of motorsport, but because it is made available to motorists around the world to ensure they can reap the rewards of improved reliability and engine performance. 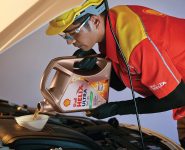