Portable battery systems have come a long way since they were first invented. They have had to evolve in order to keep up with the heavy demands for power in today’s society.
The introduction of lithium battery technology was a game changer, completely revolutionising how power is stored and used.
TOPO DC Power, based in Perth, says it is leading the way in innovation with its Centrefire portable lithium battery pack.
The earliest version of the Centrefire was built into an army surplus ammo tin, but today it comes in a rugged, custom built case.
Centrefire is designed so that it can be used either as a portable unit or as a vehicle’s second battery.
The 12-volt, 72 Ah, lithium iron phosphate battery (LiFePO4) offers an impressive 864 watts of power and weighs only just over 10kg.
The unit also comes with a built in 40-amp DC-DC vehicle charger as well as a 25-amp solar charger, which ultimately saves the user money.
An external 10-amp mains charger keeps the unit topped up when it is not in use. For those requiring extra storage, TOPO also offers its Long Range Lithium series in either a 144 Ah or 216 Ah. These are fitted standard with both DC-DC and solar charging.
In addition to its lithium battery range, TOPO DC also has its Mag series 12-volt distribution boards.
These power sockets come in a variety of configurations up to four way and can also be individually switched.  The larger boards can even be connected together using the supplied cables to create a completely customised power solution.
TOPO DC Power says that it stands behind the products it produces with after sales care that it says is sadly missing from many businesses today. 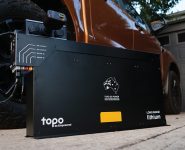 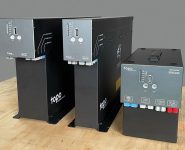 ONE LITHIUM BATTERY PACK TO RULE THEM ALL