New accessories are now available for Mazda and Isuzu utes

Tuff Australia has launched its range of new bullbars and tray bodies for the 2020/2021 twin utes from Mazda and Isuzu.
The new version of the Nissan Navara is also available with a range of Tuff bullbars ranging from the Two Post, through to the heavy duty Five Post product. New side rails, trays and canopies are also available for the Navara.
The new RAM DT1500 has had the Tuff treatment with a range of bullbars and finishes now in production for the American pick up.
Tuff started manufacturing trays and canopies in 2017 and just hit the four-year anniversary of its first tray, delivering more than 2,000 trays in the interim with demand increasing strongly.
Tuff says it is looking forward to new models from Ford and GM in the coming months, along with new SUVs from Toyota, in the form of the Toyota Landcruiser 300 Series and RAV4 Edge.
Tuff General Manager Mark Casey said demand for 4×4 products was very strong despite the current shortage of vehicles and long waiting list for popular models.
“We now have a stronger demand for Australian-made products and our Aussie manufacturers are going well, aside from labour shortages, lockdowns and steep material increases,” Mark said. “We see a strong future for Australian made 4×4 accessories and Tuff has made significant investments in recruiting additional staff and engineers to join our research and development team.
“We have also purchased adjoining properties to expand our manufacturing facility based in Toowoomba, Queensland.
“Tuff provides many options with bullbars, trays and canopies and there is a clear trend towards accessories that stand out from the crowd and have some form of personalisation.” 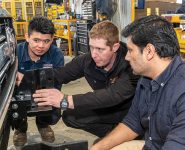 CONSUMERS LOOK TO LOCALLY MADE BULLBARS