Davies, Craig says it has a range of products to keep your vehicle cool

Australia’s automotive market continues to evolve with the three segments of Sports Utility Vehicles (SUVs) along with the 4WD segment accounting for approximately 60 percent of sales this year to date, far outstripping passenger vehicles.
With the demise of local car manufacturing Australians will be reliant on imported vehicles to fulfill their various transportation requirements. SUVs and 4×4 Utes have now become the popular vehicles of choice by a broad cross-section of the community including businesses and tradies.
Loading up these vehicles is the ‘Australian way’ and consequently the stress placed on the engines and transmissions should not be underestimated, says Australian manufacturer Davies, Craig.
A good many SUVs/Utes are packed to carrying capacity (GVM) and/or tow trailers, caravans, and boats. While some SUVs and 4WDs have a factory transmission oil cooler, in a good many cases these coolers are ill-equipped to cope with the increased heat generated by the higher hauling and tow loads in on and off-road environments.
Australia serves up some of the harshest climactic, road and terrain conditions and as such vehicle drive trains, specifically the automatic transmission, comes under enormous stress which, in turn, generates excessive heat. An over-heating transmission may suffer premature failure and lead to an expensive rebuild.
Davies, Craig says this dilemma can be mitigated with the installation of an auxiliary or indeed a full replacement transmission oil cooler. It states that a simple installation of a transmission oil cooler kit is a very economical and cost-effective way to help safeguard costly transmission repairs.
Davies, Craig explains it offers “an ideal range” of aftermarket transmission oil cooler kits directly targeting SUV and 4WD vehicles.
The Davies Craig Hydra-Cool Combo Pack models, parts #679 with an eight-inch fan and #691 with a 10-inch fan now complement the “extraordinarily successful” Hydra-Cool range, injecting more cooling ‘muscle’ for harder-working automatic transmissions. Simple DIY Installation Instructions accompany each kit and there are a good number of FAQs also listed on the website, www.daviescraig.com.au
When it comes to rough terrain, rock crawling and driving in sandy, muddy conditions where low engine revs and slow travel is essential, Davies, Craig explains this can be quite taxing on the engine.
It says the installation of a Davies, Craig remote-mounted Electric Water Pump has several advantages over the engine-driven mechanical pump. Firstly, it states an EWP will offer improved cooling capacity, a more consistent coolant flow rate at idle and/or low travel speeds when there is little or no ram air, and the elimination of heat soak after a hot engine shut-down.
The EWP operates independently of the engine’s speed, with Davies, Craig stating this is a major benefit over traditional mechanically operated water pumps that are only able to circulate coolant only while the motor is operating.
When used with the Davies, Craig LCD EWP/Fan Digital Controller (part #8002), Davies, Craig says the pump speed is increased and decreased based on the engine’s operating temperature, instead of RPM. This means the engine’s heat output will determine the pump’s flow rate. If the motor is cold, it will run the EWP at a reduced speed to allow a faster engine warm up. Once the engine temperature begins to climb, it will increase the pump’s speed accordingly.
At the moment when the engine’s temperature reaches -5◦c below the pre-selected targeted/set operating temperature, the EWP will ramp up to 100 percent flow rate to control the temperature within the desired temperature range to bring the temp down. When the temperature rises +3◦C above the set/targeted temperature, the LCD EWP/Fan Digital Controller will automatically activate the electric fan/s to support the engine cooling process.
The original mechanical water pump can be either left in place and operate in conjunction with the EWP or it can be blanked off completely. To simplify the EWP Combo Kit installation, Direct Fit Adapter Kits are available for some engines that free up valuable space and take weight off the front of the engine.
When used as an idler, the impeller from the OEM water pump is removed and the EWP is installed in the lower radiator hose. In this situation Davies, Craig says the user will gain all the excellent benefits of utilising an electric water pump, while retaining all the factory pulleys and belt configuration.
Davies, Craig says its electric water pumps are light, compact and easy to install and may well be the answer for difficult to cool SUVs and utilities while offering increased performance at the same time.
When used with the LCD EWP/Fan Digital Controller engine temperatures, pump speed and electric cooling fans are automatically controlled. 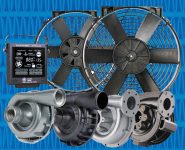 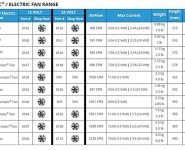 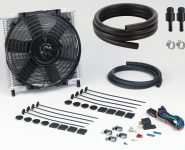 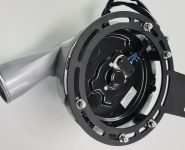