Founded in 1946, ALLIN Towbars has built a reputation for quality, performance, and customer service

Punching well above its weight against much larger competitors in what is becoming an increasingly complex market, sisters Penni Donato and Kylie Walden have set this fiercely Australian company up for long-term success.
Initially established more than 70 years ago by Noel Allin, who also lent his name to the new entity, ALLIN started building trailers on the same site in Richmond, South Australia that the business still operates from today.
There is little doubt that Noel would recognise the site on which it all started if he paid Penni, Kylie and the rest of the team at ALLIN Towbars a visit today.
Since taking the reins full-time in 2014, the dynamic duo has successfully evolved what was still a good, albeit old-fashioned business, into a start-of-the-art manufacturing, design and installation enterprise.
“Our family affair with the automotive aftermarket started when our father Ron Gynell, and a second partner, bought into the business back in 1983,” Penni said.
Under Ron’s stewardship, the company grew quickly, and the new management team focused on towbar manufacturing, leaving smaller fabrication shops to fight over the increasingly competitive yet fragmented trailer market.
“During these 15 years, the business went from strength to strength and one of the key times was when Dad and his partners secured the OE contract with Mitsubishi,” Penni explained.
“It grew quite quickly, and as a result, they bought adjoining properties and developed the site, increasing its footprint three-fold.”
Of course, nothing lasts forever, and the ever-present pitfalls of dealing with a huge OE manufacturer finally took their toll. In the early 2000s, Ron parted ways with the other two shareholders, taking a 100 percent stake in the business.
“It was an exciting time for my father and our whole family,” Penni said.
“Around the same time, Kylie and our other sister Sam joined Dad before I did a stint as General Manager in the mid-2000s when Dad got sick.”
Penni had already built a successful career in hotel management and was working at Aristocrat before stepping in to lend a hand.
“When Dad took ill the first time, it was all hands-on deck, and as a family, we really pulled together,” said Penni.
“It was certainly a challenge, and I was thrown into the deep end, but we made it through, and while we didn’t know it at the time, it gave us a small glimpse into the future.”
Ron overcame his health issues and returned to the business, and Penni moved back into hotel management. For a while, the family’s world returned to normal until Ron’s health took a turn for the worst, and when he sadly passed in 2014, the next generation stood up to continue his legacy.
“Sam, Kylie, and her husband Grant had stayed on following Dad’s first health scare, but I have to admit it was a bit of a shock to the system returning to the business after a three-year absence,” Penni remarked.
“Dad had built an excellent business with a fantastic reputation, but we hadn’t done any succession planning before he passed.
“So as a family, we had to decide if we were going to sell or pull together and have a big crack at evolving into something that would make him proud and set up a legacy for future generations, and that’s what we’ve done.”

With the decision made, the shares were signed over just two days before Ron passed, and the baton was firmly placed in the hands of his three daughters and son-in-law.
“It was perhaps the biggest decision I’ve ever made, but looking back, I wouldn’t change a thing,” said Penni.
Not wasting any time, the family started making changes quickly.
“As I’m sure you can imagine, the business was a bit of a boys club when we took the reins in 2014,” Penni explained.
This is certainly not uncommon for long-established manufacturing businesses in any industry. Still, Penni and the rest of the family knew it would take a significant culture shift to secure long-term success.
“Before we started making any significant changes, there was one critical issue that we needed to address urgently, and that was to build a female bathroom,” Penni said with a smile.
“Back in the day, we didn’t have a ladies’ room, so myself and my two sisters had to avail ourselves of the facilities of the pub across the road anytime nature called. It certainly wasn’t an ideal situation, but it gives you some insight into the challenges ahead.”
Any executive that has managed, or been privy to a culture change project, will attest to the considerable effort that needs to be invested to truly change workplace culture, not just pay it lip service. So, Penni, Kylie and the rest of the family knew they’d have their work cut out for them.
“That blokey culture was certainly rusted on, but we worked with a consultant, built out a set of company values, and developed a playbook that we share with our employees and use as a tool when hiring new team members to make sure their values align with ours,” Penni explained.
“It has provided our team with more structure and allowed us to share our vision, knowing it was for the common good.
“Ultimately, some people didn’t want to change and join us on the journey, so they left the business,” Penni explained.
“The key to being able to push forward was to work out the people that weren’t prepared to change and remove them from the business so we could focus our efforts on those that were prepared to change. Building trust took time, especially when they were used to dealing with our Dad in a certain way, but the results have exceeded our expectations and those of our employees.”
Running in parallel, the team undertook a rebrand that captured the essence of the new direction while still embracing the business’ long and successful history. The result was a fresh look that cemented the business’s contemporary culture and a renewed focus on quality, excellence, and customer service.
“We’re known as the fix-it people, and like everyone, we make mistakes, but as part of our company culture, we own them and fix them fast. We don’t want a single unhappy customer, and that’s something we certainly leant from Dad,” said Penni.
It’s this reputation as the ‘Fix-it’ people that drove the family to reinvest heavily in plant, equipment, people, technology and expertise, transforming the business and vertically integrating all activities from product development and design to manufacturing, testing and installation.
“While it might not seem like it to an outsider, the tow bar industry is quite complex,” said Penni.
“If a vehicle has a tow rating, we manufacture a tow bar to suit.”
This complexity extends from the fact that all towing products are application-specific, and every time a new model is released, there is a race to be first to market with a towing solution.
To counter this effect and insulate itself from mass production imports, ALLIN has a team of design and mechanical engineers committed to getting new products to market fast without sacrificing quality.

“Unlike bigger manufacturing companies, our size and vertically integrated structure keep us agile,” Penni explained.
“Our competitors can’t make things happen quickly, but we can. For example, if we need to change something or rework something or a customer comes in with an order for 20 tow bars that they need next week, we can do it.”
This engineering grunt feeds into a state-of-the-art manufacturing plant. It is supported further by a licensed, in-house ADR testing facility, a fully equipped workshop and an impressive retail space.
When you add all these elements together, you start to realise just how much the business has evolved since 2014.
“We’re adaptable, we’ve got a skilled team with a diverse set of skills, but that has thrown up new challenges,” Penni added.
There has been much press about Australia’s severe shortage of skilled labour. Still, the team at ALLIN has somewhat countered this issue by rolling out in-house, mature-aged trainee and apprenticeship programs.
“At any given time, we’ve got between two to four employees completing apprenticeships and this has significantly reduced pressure on staffing and resourcing,” Penni said.
ALLIN’s reputation has earned it the credibility to align itself with the 4WD industry giant ARB, with the quality ARB range considered a complementary fit for ALLIN. So when the opportunity arose to become an official ARB stockist and installer, ALLIN jumped at the chance.
“The ARB range fits hand-in-hand with all our other products and has seen us become a one-stop-shop for the massive 4WD market,” Penni said.
“We offer our customers a wide selection of quality products including canopies, bull bars, side steps, snorkels and of course tow bars.”
ALLIN is also proud to stock Smart Bar, an innovative product also manufactured in South Australia that highlights its commitment to staying Australian-Made and supporting Aussie businesses.
“Part of our business ethos is to support Australian-made products,” Penni said.
“On the manufacturing side, we use all the Australian Made steel we can get our hands-on, and apart from a couple of small components and the wiring looms, we source products used to manufacture our tow bars locally.”
Of course, a large part of the business’ continued success is its substantial retail presence.
“Over many decades, Dad maintained relationships built on the highest levels of customer service and quality advice, and we’re proud to continue his legacy,” Penni said.
Today, the ALLIN’s team still welcomes second and third generation customers, many of whom make comments like, ‘My grandpa came here, and my Dad came here, so of course, when I needed a tow bar, I didn’t think twice’ – such is the reputation the company enjoys.
In addition to its substantial retail business, ALLIN is also the preferred supplier to various government departments, including the Department of Transport, SA Police and SA Water.
There is little doubt that Penni, Kylie and the rest of the family have not only paid tribute to their father’s legacy, but their commitment, vision and application have also set up ALLIN Tow Bars to enjoy many more decades of success.

Previous: BRAINSTORMING FOR SUCCESS
Next: THE TRUSTED NAME IN LITHIUM HAS ARRIVED 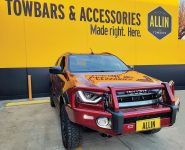