Incorporating Lithium Iron Phosphate (LiFePO4) technology, the Century Lithium Pro is designed to provide long lasting power in recreational deep cycle applications – by offering a compelling energy density in a relatively lightweight footprint when compared to conventional lead-acid batteries.
Capable of delivering over 3000 cycles at 80 percent depth of discharge, Century says the Lithium Pro offers a longer service life compared to lead-acid batteries, whilst also providing more usable energy and up to 10-times faster recharging.
One of the most important aspects of any Lithium Deep Cycle battery is the Battery Management System – or BMS.
The role of the BMS is to regulate and protect the charge and discharge of the Lithium battery cells, in order to protect against short circuits, over-charging or over-discharge, and operating temperature.
In this respect, the Century Lithium Pro has an advanced BMS system which also incorporates a state-of-the-art Bluetooth monitoring system to monitor battery capacity, state of charge, plus voltage readings, state of health, and remaining run time.
Century says the superior energy capacity, operating temperature range and lightweight design makes Century Lithium Pro batteries ideal for use in a range of applications where longer life, faster recharge and dependable power is required – such as a 4×4 or Marine dual-battery system, power for caravans, camper trailers and motorhomes, or as a primary power source for golf carts or personal mobility vehicles.

Century says the most important aspect which sets Century Lithium Pro batteries apart from competitors is that they’ve been developed and tested in accordance with industry standards relating to performance and safety.
Beyond the standard UN38.3 which covers the battery cells, Century Lithium Pro batteries were subjected to additional rigorous testing achieving further certification for the whole battery and its components. This includes achieving IE62619 for safety, IEC61960 for performance, and IEC60095 for vibration.
The real draw card of the Century Lithium Pro is its weight – or lack thereof.
The Lithium Pro C12-100XLi offers 100Ah of power, which is comparable to the Century N70T flooded deep cycle battery with 102Ah.
Both products are also nearly identical when it comes to their external dimensions. But when it comes to weight, the Lithium Pro battery is almost half the weight – clocking in at just 13.5kg compared to the N70T’s 25.1kg.
Additional size options – including 100Ah slimline and 200Ah sizes – will also be added to the Century Lithium Pro range in the near future.
This weight saving can provide additional flexibility when it comes to the installation – making it ideal for weight restricted and GVM applications.
Century says it is even more convenient especially when you consider Lithium Pro can be tilt/angle mounted on angles up to 90° side-mount.
When compared to conventional lead-acid deep cycle batteries, Lithium Pro can also deliver more usable energy – and be discharged to 80 percent (20 percent capacity remaining) without compromising performance over time.
This delivers more usable energy for the same size case when compared to lead-acid, which carry a maximum recommended discharge of 50 percent of their rated capacity.
Lithium Pro can also be recharged faster – up to 10 times faster in fact – for less downtime and quicker deep discharge recovery.
Century Lithium Pro batteries can be recharged using a DC to DC charger, solar panel/blanket or ‘smart’ battery charger configured for Lithium batteries.

Century’s new range of battery chargers and maintainers
To accompany the new Century Lithium Pro range, Century says its new range of battery chargers and maintainers are here to make maintaining batteries simpler and easier than ever before – consisting of three new models which can charge and maintain a wide range of battery types across many different usage applications.
The Century charger range caters to AGM, GEL, EFB flooded and Calcium SMF lead-acid batteries – with the flagship CC1212-XLi also gaining compatibility with the latest Lithium (LFP) batteries.
Suitable for charging batteries from 3Ah up to 240Ah, the Century charger range includes features such as a nine-stage charging process, selectable output current, reverse polarity protection, and an eco power mode to reduce energy consumption.
In addition, all chargers feature a patented rejuvenation feature built-in, which uses peak pulse reconditioning to repair heavily discharged lead-acid batteries.
Backed by a comprehensive five-year warranty, the Century charger range also has a built-in “battery maintainer” mode, which automatically engages once the battery has reached full charge.
In this mode, the charger can be left connected 24/7 to periodically trickle charge batteries from 3Ah up to 360Ah to ensure they remain fully charged.

Century says this is ideal for lead-acid batteries which see occasional or infrequent usage, such as boat, motorcycle and ride-on mower starting batteries, or deep cycle battery systems installed in caravans or camper trailers.
In the event that a battery has been heavily discharged for an extended period of time, the Century CC1212-XLi and CC1206 are capable of activating on batteries reading as low as two volts, and initiating the charging process.
The CC1212-XLi can also be used on Lithium (LFP) batteries where the Battery Monitoring System (BMS) has entered “sleep mode” because the cell voltage dropped below the minimum threshold.
In this situation, the Century CC1212-XLi has a Lithium LFP Wake Up mode, specifically designed to wake up the BMS and commence charging.

For more information on Century’s Lithium Pro or Charger ranges and to understand how your business can benefit from becoming a stockist, Century invites you to contact your local Century Yuasa representative on 1300 362 287. 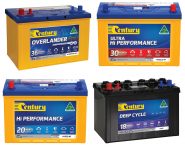 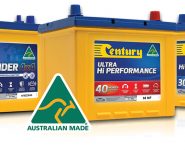 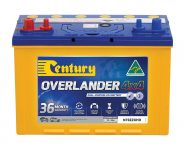 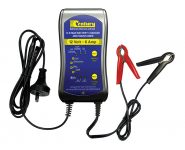