Embracing a passion for performance that was sparked as a youngster, today Glenn Paine combines this passion with his engineering prowess and extensive automotive industry experience to drive well-known performance brand Pro Race into the future

Born in Paramatta and raised in Northmead, Pro Race Performance Products Managing Director, Glenn Paine, grew up right in Sydney’s motorsport heartland.
“For as long as I can remember, I’ve always been into cars,” Glenn said.
“It all started innocently enough, starting out with Matchbox cars, but the die was cast when my parents bought me my first AFX slot car set when I was nine years old.”
Traveling into central Parramatta to change buses for Carlingford, where he attended James Ruse Agricultural High School, Glenn discovered the G&D Slot Car centre. That Christmas his parents delivered a “Womp Womp” slot car, and he was soon working there as a 14-year-old and racing comp each Wednesday night.
Glenn freely admits that he was bitten by the ‘collecting’ bug early, and together with his late father Ken, built what is considered one of the most extensive collections of 1960s and 70s slot cars in the southern hemisphere. And while Glenn lost count many years ago, he estimates his collection has grown well beyond 4,000.
“Slot car racing was a massive fad in the 1960s,” Glenn explained. “Today, you might still be able to find one or two slot car centres around, but there were literally hundreds in the sixties.”
“I competed at the Australian Titles in Melbourne when I was 14 finishing tenth. It was an amazing experience and one that I still cherish to this day.”
Unfortunately, the popularity of slot car racing started to wane towards the end of the 1960s and in the 70s home set racing started to take over. Glenn stopped racing to focus on his HSC in 1983, but the father and son team started collecting old slot cars.
“We grabbed everything we could get our hands-on, and it’s a passion that’s stayed with me for my entire life,” Glenn mentioned.
“Today, I’m confident my collection is the biggest in Australia, maybe the Southern hemisphere. I did promise my father when he passed away that I’d get it all on display one day, which is still on the bucket list. It is mostly held in storage units, but I have a plan to bring the display to fruition in the future off the back of the continued growth of the Pro Race business.”
If that’s not enough, Glenn has a very healthy Bathurst racing memorabilia collection to display alongside the slot cars.

Glenn started his career when he took on an engineering cadetship at Sims Metal.
“The cadetship at Sims Metal was a great foundation on which to build my professional career,” Glenn explained.
“It provided me with an in-depth understanding of heavy hydraulics, and I did much work on their shears and shredders. It’s funny how things come to pass, I basically started my career by crushing cars, including those from the Mad Max 3 film, and now Pro Race is supplying components to engine manufacturers around the world,” Glenn quipped.
Following his time at Sims Metal, Glenn worked for James Hardie in an asset management role and oversaw a greenfield installation of an aluminium extrusion plant in Smithfield for G. James Glass and Aluminium before a chance meeting at a mate’s wedding changed the course of his career significantly.
“Right around the time the aluminium extrusion plant was being commissioned, things were starting to slow down. Well, that was until I received a call from one of my mates who said that his uncle wanted to have a chat about a potential new job opportunity,” Glenn said.
As it turned out, about a year before Glenn’s mate had gone and got himself hitched in Melbourne and Glenn had met his uncle, John Edwards who was also from Sydney, at the wedding.
“John was a very unassuming fellow who became a great mentor for me. John ran a small business called J&L Edwards Pty Ltd. So, I gave him a call, and he asked me if I was interested in joining the business as an engineer. He also asked me how much I knew about torque converters, which was absolutely nothing,” Glenn said.
A week later, Glenn arrived at the J&L Edwards office for an interview and brimming with confidence after spending seven days researching torque converters.
“The hard work paid off, and I got the job,” Glenn said.
At that time, the business represented several automotive brands, including Sachs (acquired by ZF in 2001) and WABCO (recently also acquired
by ZF). Still, the primary focus was the supply of torque converters to what was then the BTR transmission plant in Albury.
“The next big shift came in 2002 when ZF flagged their interest in GM’s global Zeta architecture project,” Glenn explained.
Via the J&L/Sachs connection, John and Glenn were chosen to support ZF through the acquisition process.
The Zeta architecture was going to underpin Holden Commodore and the Camaro program, selected Pontiac programs as well as some vehicles in China, so at that time, the plan was for it to become a truly global platform.
“During this time, Holden was the lead program on the Zeta platform as they were GM’s home office for rear-wheel-drive design globally,” Glenn said.
ZF was awarded that business in November 2003 and local company ZF Lemforder Australia Pty Ltd was established.

ZFLA supplied complete rear modules and front corner modules for the VE Commodore, and the company set up the JIS (just-in-sequence) operation next to the Holden production line in Adelaide.
At the time, Glenn was still living in Sydney, but as the trips to Melbourne became more frequent, he bit the bullet and moved the family down in October 2004 for what he then thought would be a three-to-five-year assignment (he’s still there).
“We set up the ZF office in Turner Street, just down the road from Holden head office and started building the plant in Edinburgh Park, South Australia, which opened in June 2006,” Glenn said.
“It was a very successful program, but GM did a bit of a switcheroo, and the Zeta architecture really never became a global platform. By the time the Camaro arrived, it was built on the Zeta 2 platform, which shared very few components, so it ended up being all about Holden.”
Glenn became the Global Account Manager for GM for Chassis Systems during that period. In this role, he was responsible for delivering similar projects in Thailand, Brazil, China and North America.
“It was a hectic time of my life, and Australia is not in the best time zone, but I loved every minute of it,” said Glenn.
“I was on the ZF global councils for both GM and Ford, and during that period, we were the number one supplier to Holden in terms of dollar value, and I was also on the Holden supplier council. Concurrently, we were the number three supplier to Ford, with the six-speed transmission on Falcon and Territory, and aluminium front suspension and Sachs monotube damper program for Falcon in full swing.”
But of course, all good things come to an end, and Glenn finished up at ZF on June 30, 2017, only a few short months before the final Commodore rolled off the production line.
Glenn decided to take a few months off to consider his next move, when he received an interesting call from one of the automotive aftermarket’s more colourful characters in ex-Top Fuel drag racing Champion, Graham Withers.
“Graham asked me to come and have a look at his business, Cyco Systems Corporation, of which Pro Race Performance Products was one of the business units. I ended up working with Graham, and we got the business to a point where it was ready for sale, as he approached his retirement, so we started hunting around for buyers,” Glenn said.
At the same time, Glenn was approached separately and offered an off-market opportunity to purchase an manufacturing business called Great Engineering. When Glenn saw the facility, he knew straight away that the Pro Race business could be an attractive add-on. Glenn did some modelling, ran the numbers, and as a shared overhead, the Pro Race business looked profitable.

“My Business Manager, Simone Ryan, agreed to jump across to help run the new business and off we went. It took some negotiating, but I settled on both businesses in March 2021. We’ve been trading for a little over a year now,” Glenn said.
“It probably wasn’t the best timing to take over a new business, what with the COVID pandemic causing chaos around the globe, but I’m happy to report that Pro Race is going very well.”
Pro Race is primarily an export business, with the United States accounting for approximately 90 percent of sales.
“We make harmonic dampers, primarily designed for high-performance engines. So, we’re not an OEM replacement. We know what we’re good at and where demand is strong, so we have a fairly narrow range of products, with a focus on Ford, GM and Chrysler, with a little bit of retro English stuff mixed in for good measure, including Jaguar, Austin Healey and MG,” Glenn said.
Pro Race supplies harmonic dampers for several of the big US OEM crate engine programs, in addition to supplying performance heavyweights Jegs and Trick Flow via a US warehouse in California.
“Not many people realised that there are several different designs and philosophies when manufacturing harmonic dampers. Many companies in the states white label our product, but we recently started to invest in building our brand in this massive market,” Glenn said.
All Pro Race products run full coverage elastomer style dampers that deliver several benefits, especially for street cars running high-performance engines.
“Unlike a lot of our competitors, our harmonic dampers are basically set and forget. Our Pro Racer and Pro Sport range of harmonic balancers are SFI certified so that you can use them for competition, but if you are just a street guy with a high-performance engine that you’re not trying to retune every second day, then you wouldn’t look past Pro Race,” Glenn said.
“Our Pro Racer dampers are designed with a rolled lip, so you don’t need to service them, you can just bolt one up and leave it there for 15 or 20 years, go cruising and just enjoy your car without giving it a second thought and that’s our competitive advantage.”
Looking to the future, Glenn has already identified that developing products to suit the Ford modular and GM LS series engines will deliver growth.
“We’re also starting to focus on new supercharger dampers applications. Because we don’t necessarily need huge volumes to develop new products, when we identify an opportunity, we can bring it to market quickly,” Glenn said.

To find out more about Pro Race, visit www.pro-race.com 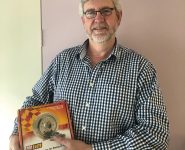