If you’re an outback lover and can’t get enough of exploring all this land has to offer, you can’t be without a high-performance air compressor.
The best, non-invasive and most cost-effective way to avoid getting bogged is to air down and reinflate later with an air compressor. Why? It’s all about traction.
When tackling loose terrain, lowering your tyre pressure elongates your tyres’ footprints, making it easier for your vehicle to gain traction, keep momentum and avoid getting stuck. But to hit the highway you’ll need to pump those tyres back up again.
TJM says it has successfully created an industry leading air compressor that can combat the harsh Australian environment and inflate tyres quicker than ever before through a new, revolutionary design.
TJM says the Pro Series Twin Air Compressor has been revered for its best-in class performance when tested against its direct competitors.
In tests carried out by the TJM R&D team, the TJM Pro Series Twin Air Compressor reportedly outperformed major competitors for the lowest average critical temperature and for the industry’s fastest single tyre and four tyre inflation.
TJM says this “monumental” 12V air compressor can inflate four tyres (from 16 to 40 PSI) in five minutes and 21 seconds with “zero chance” of automatic shut-off caused by overheating and allows a consistent and continuous airflow while operating.

Further, it states that the compressor’s multifunctional design can power air suspension systems or air powered tools when combined with TJM’s 5L Air Tank.
It can even inflate a single tyre from 0 PSI to 40 PSI in two minutes and 30 seconds – a feat TJM says is “seriously impressive.”
Now, for 4WD adventurers being able to deflate and reinflate your tyres at a moment’s notice is an all too real luxury.
However, with an air compressor comes an exceptionally high heat output, that can result in many air compressors shutting off completely due to overheating – turning the short inflation time into a couple of hours of waiting for the unit to cool down.
Fortunately, through constant innovation, testing and perfecting the design, TJM says the TJM Pro Series Twin Air Compressor has solved this pet hate to minimise time spent sorting your tyres out to get you back on the road faster.
While air compressors are nothing new to the aftermarket industry, the technology behind the TJM Pro Series Twin Air Compressor certainly is, with TJM explaining that the TJM Pro Series Twin Air Compressor achieves a 100 percent duty cycle to maximise operation time and prevent the air compressor from shutting off.

Previous: BRAKE HOSES
Next: AUTOMATE FOR SAFETY AND PRODUCTIVITY 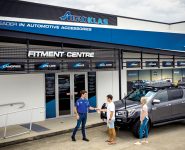